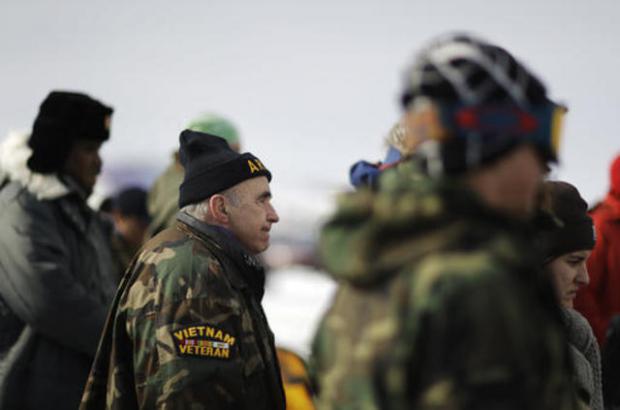 A group of US veterans is quickly becoming a powerful force in the national fight for ensuring the right of all Americans to clean drinking water. The "Veterans Stand for Standing Rock" group, organized by Army veteran Wes Clark Jr., arrived at the site of Dakota Access protests a few days ago in a show of solidarity with Native Americans. The veterans acted as "human shields" protecting protestors from escalating police violence and prevent a previously announced yet now-defunct plan to "relocate" protester encampments to designated "free speech zones." Just one day after the veterans had begun to arrive en masse, the US Army Corps of Engineers bowed under pressure and denied the pipeline company the necessary easements to drill under the Missouri river, fulfilling a major goal of the on-going protests.

Now, this group of noble veterans already have their next destination in mind: Flint, Michigan. Though recent media attention regarding Flint has been minimal, it has been another focal point of the US' growing water crisis as residents have now been without clean drinking water for years. Flint's water pipes, which were found to have leached lead into the city water supply, have still not been replaced, forcing its nearly 100,000 residents to depend on bottled water to meet their daily water needs. Michigan's state government, tasked with replacing the town's corroded pipes, have taken incompetence to a new level as the project has been consistently delayed. To make matters worse, the state of Michigan has also allowed Nestle, the world's largest food company, to triple the amount of nearby groundwater it pumps from its bottled water plant just 120 miles from Flint.

"Veterans for Standing Rock" have not yet decided on a date to make their next "stand" at Flint. Clark, the original organizer of the movement, told the Flint Journal of the planned mobilization and explained why the Michigan community was their next destination: "The problem is all over the county. It's got to be more than veterans. People have been treated wrong in this country for a long time." One of the veterans who made the journey to Standing Rock, Arthur Woodson, is a Flint resident who hopes the next showing of solidarity will help revive media attention regarding the community's on-going crisis. Another Flint resident among the veterans, George F. Grundy II, said he was overwhelmed by the concern for Flint trouble's expressed by Native Americans and Dakota Access protestors.

He told the Flint Journal: