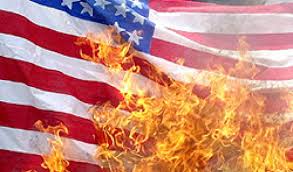 "If there is any fixed star in our constitutional constellation, it is that no official, high or petty, can prescribe what shall be orthodox in politics, nationalism, religion or other matters of opinion." — U.S. Supreme Court Justice Robert H. Jackson

Is flag burning protected speech? This old issue returned front and center earlier this week after President-Elect Donald Trump tweeted that he found it so reprehensible, it should be criminal. He even suggested a punishment — loss of citizenship or one year in jail. Is the President-Elect correct? Can the government punish acts that accompany the expression of opinions because the government, or the public generally, hates or fears the opinions?

Last weekend, in a series of continued emotional responses to the election of Donald Trump as president of the United States, and prodded by the death of Fidel Castro — the long-time, brutal, profoundly anti-American dictator of Cuba — students on a few American college campuses publicly burned American flags. These acts regenerated the generation-old debate about the lawfulness of this practice, with the president-elect decidedly on the side of those who condemn it.

For the sake of this analysis, like the U.S. Supreme Court, which has addressed this twice in the past 17 years, I am addressing whether you can burn your own American flag. The short answer is: Yes. You can burn your flag and I can burn mine, so long as public safety is not impaired by the fires. But you cannot burn my flag against my will, nor can you burn a flag owned by the government.

Before the Supreme Court ruled that burning your own flag in public is lawful, federal law and numerous state laws had made it criminal to do so. In analyzing those laws before it declared them to be unconstitutional, the Court looked at the original public understanding of those laws and concluded that they were intended not as fire safety regulations — the same statutes permitted other public fires — but rather as prophylactics intended to coerce reverence for the American flag by criminalizing the burning of privately owned pieces of cloth that were recognizable as American flags.

That is where the former statutes ran into trouble. Had they banned all public fires in given locations, for public safety sake, they probably would have withstood a constitutional challenge. But since these statutes were intended to suppress the ideas manifested by the public flag burning, by making the public expression of those ideas criminal, the statutes ran afoul of the First Amendment.

The First Amendment, which prohibits Congress from enacting laws infringing upon the freedom of speech, has consistently been interpreted in the modern era so as to insulate the public manifestation of political ideas from any government interference, whether the manifestation is by word or deed or both. This protection applies even to ideas that are hateful, offensive, unorthodox and outright un-American. Not a few judges and constitutional scholars have argued that the First Amendment was written for the very purpose of protecting the expression of hateful ideas, as loveable or popular ideas need no protection.

The Amendment was also written for two additional purposes. One was, as Justice Jackson wrote as quoted above, to keep the government out of the business of passing judgment on ideas and deciding what we may read, speak about or otherwise express in public. The corollary to this is that individuals should decide for themselves what ideas to embrace or reject, free from government interference.