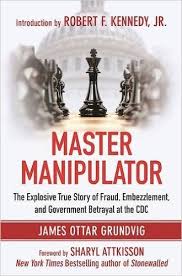 Statistics don't lie, but statisticians certainly can. In his book, "Master Manipulator: The Explosive True Story of Fraud, Embezzlement, and Government Betrayal at the CDC," investigative journalist James Grundvig exposes what really goes on at the U.S. Centers for Disease Control and Prevention (CDC).

In it, he reveals how the agency has engaged in massive fraud, misinformation and manipulation of vaccine information. What made Grundvig write such a book?

"A couple of reasons," he says. "One is I have an autistic son who's 16 years old now. He's one of the 5,000 cases kicked out of vaccine court [for] thimerosal poisoning.

Number two, I'm first generation Norwegian-American. Poul Thorsen, the main manipulator — but not the only one — is of Danish descent. I was introduced to an alliance [that asked me] to track down Thorsen over in Denmark, a culture and country I know very well."

Thorsen is a major player and an essential character in this real-life drama. In 2011, he was charged with 13 counts of wire fraud and nine counts of money laundering. A federal grand jury alleged Thorsen stole over $1 million from autism research funding between February 2004 and June 2008.

He stole the money while serving as the principal investigator for a program studying the relationship between autism and exposure to vaccines. At the time, The Copenhagen Post reported that:1

"... [Thorsen] submitted over a dozen false invoices from the CDC for research expenses to Aarhus University … instructing them to transfer the funds to a CDC account, which was in fact his personal account ...

Thorsen's research on autism is widely known in academic circles, where he was until this week a highly respected figure. A paper of his on the subject, which is known as 'The Danish Study,' is quoted extensively to refute the autism vaccine connection."

As of 2014, Thorsen was permanently expelled from Denmark's university hospital system.

Why US Never Bothered to Catch Fugitive CDC Scientist

Thorsen has been a fugitive for the past five years. Yet his whereabouts are no secret. As noted by Robert F. Kennedy, Jr. in a 2015 Forbes article:2

"The fact that he is roaming free and is easy to find, despite the U.S. Federal indictment … suggests a lack of enthusiasm by HHS and CDC to press for his capture and extradition.

The agency undoubtedly fears that a public trial would expose the pervasive corruption throughout CDC's vaccine division and the fragility of the science supporting CDC's claims about thimerosal safety."

"They would never extradite Thorson because if he came here, there would be a bloodbath at the CDC. People like Coleen Boyle would likely go to jail. Julie Gerberding, the former director of CDC from 2002 to 2009 would likely be in trouble, and others as well."

Indeed, I've written about Gerberding's extraordinary conflicts of interest before. For those who are unfamiliar with this story, she's a classic example of the revolving door between the industry and the federal regulatory agencies.

After leaving her position as head of the CDC, she became president of the vaccine division of Merck, the biggest supplier of vaccines in the world. To think she would not use her insider knowledge to influence the CDC on her employer's behalf would be extremely naive.

Thorsen's spectacular demise was likely the result of an inside tip to Aarhus University. But was he really the sole person responsible for the creation of these manipulated studies? According to Grundvig's investigation, the CDC appears to have had a clear hand in the deception.

In 1999, Thorsen — who had earned his Ph.D. in Denmark the year before — was invited to the CDC in Atlanta as a foreign visiting scientist. He arrived at a time when there was a lot of discussion between vaccine makers and the CDC to remove thimerosal from vaccines.

Thorsen ended up being hired full-time to conduct five studies on Danish people, as the Danes had a preexisting database covering the entire population. In the U.S., no federal health authority was collecting this kind of comprehensive vaccination and health data. "That was the beginning of five corrupt Danish studies that were done: four on thimerosal; one on MMR," Grundvig says.

Thorsen's "Danish Study,"3 which was never retracted, reported a 20-fold increase in autism in Denmark AFTER mercury-based preservatives like thimerosal were banned from vaccines. This study has since been used to support the idea that thimerosal has no bearing on autism rates.

However, it was actually an example of lying by omission, because at the same time the apparent autism increase took place, a new Danish law required autism cases to be reported on the national level. There was also a new clinic dedicated to autism treatment.

These two factors were likely the driving forces behind the sudden spike in reported autism cases, but the researchers didn't even disclose them, let alone take them into account. Despite the obvious ramifications of these omitted details, the CDC has relied on the Danish Study to "prove" their case that MMR vaccine and mercury are safe.

Moreover, the fact that Thorsen's scientific integrity was in serious question was completely lost on the CDC, which issued the following statement following his arrest warrant:4

"Dr. Thorsen was one of many co-authors on these research projects. All of these were subject to extensive peer review and we have no reason to suspect that there are any issues related to the integrity of the science."

In researching Thorsen's involvement with the CDC, Grundvig came across other instances of malfeasance. In 1984, Coleen Boyle was a principal investigator for the CDC, charged with investigating the effects of Agent Orange. Today, Boyle is the director of the National Center on Birth Defects and Developmental Disabilities (NCBDDD), an arm of the CDC.

In the 1980s, the CDC was given extensive information from the army on Operation Ranch Hand about the flight patterns of Agent Orange. The information was archived in Pennsylvania, but the CDC refused to go to the archives and look at it. Doing so meant they'd have to face the truth about the contamination of U.S. troops — about half a million American veterans who suffer from cancers and other diseases caused by Agent Orange.

The CDC basically gave up on the Agent Orange studies saying they "couldn't figure it out," when in fact they could have, had they simply gone to Pennsylvania. In so doing, they forfeited $21 million in research money, which in and of itself raises questions about motives. Apparently they deemed the loss of $21 million to be preferable to what they might find by doing the research.

"The 101st Congress came out [with a report in 1990 and called it [the] "Agent Orange cover up" to basically skewer the CDC. Unfortunately, nothing happened. They didn't fire the people in charge. They didn't clean house in the CDC. Once those people at the top were able to get away with this, they felt emboldened. They also had a template for future issues like Ebola and Zika," Grundvig says.

With Boyle, the CDC demonstrated they are really masterful at covering up issues that are directly related to the public health, or issues that could have a negative impact on people's perception of a certain exposure.