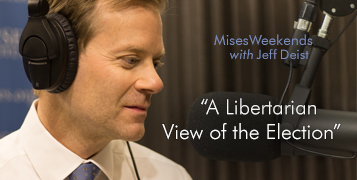 The information genie is out of the bottle, and it's not going back. In the digital world, people are abandoning what Tom Woods calls the 3×5 index card of allowable opinion and having real debates, without any media filter.

It's possible to get the "news" from social media feeds tailored to one's own viewpoint. So when CNN, for example, shows poll results that suggest a certain trend, we're all supposed to accept this as gospel truth. But if CNN never shows up in your social media feed, and you don't watch CNN (and I know you don't), it's as though the poll never happened, at least for you. And there are more and more people turning off and going around the gatekeepers. The bottom line is that the media and the parties have lost control of the approved narrative.

Our challenge is not getting information; it's sifting through all of it. The avalanche of 24-hour news, websites, and social media creates so much white noise that the political class actually hides its criminality in plain view. They just hope it gets drowned out. In the Watergate era, one simple story — a burglary — held the country in thrall for months. Today, every WikiLeaks dump seems to contain the seeds of a thousand Watergates. The information is there for anyone who wants to find it. So it's not that we don't know what politicians are up to, it's that we know too much — and a kind of fatigue sets in that entices us to shrug and accept it.

Consider another silver lining: Progressives and Democrats have been fully exposed as the illiberal authoritarians they've always been, regardless of their stated policies or objectives. The election has made plain their real character, their reactionary tactics, and their now-open agenda. The idea that conservatives exist, or even participate in elections, is an affront to them. The 2016 election has brought this reality home to average people in so many ways — but it is especially visible in the open hatred and contempt for Trump supporters. Whatever you think of Trump, this public unmasking of the Left is something new.

People in this room already know what real liberalism is. But the people who stole that word, today's progressives, do not. They are not building a blue-collar working class movement, to put it mildly. These are not your father's liberals, organizing union halls or telling us to make love, not war. They care nothing about civil liberties, and as for peace, well, just look at the who's who of neoconservatives endorsing Hillary Clinton. And we're not just talking about crazy college kids who will grow out of it or a handful of Marxist radicals. Mainstream Democrats, including Hillary and Obama, are directly responsible for using identity politics to further themselves by inflaming hatred and distrust.