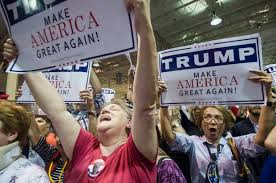 MIAMI/WASHINGTON, Nov 9 (Reuters) - Fed up with Washington and feeling left behind, supporters of Republican Donald Trump upended the U.S. presidential race, electing a political newcomer they say offers the country a shot at dramatic change.

Once dismissed by Trump's Democratic rival Hillary Clinton as "deplorables," supporters interviewed on Tuesday shrugged off his late-night tweeted insults, allegations against him of sexual misconduct and dire warnings from many in the Republican establishment that the businessman-turned-reality-television-star would throw U.S. economic and foreign policy into disarray.

The economy, terrorism and healthcare ranked as the top three concerns facing Americans casting ballots in Tuesday's election, according to an early reading from the Reuters/Ipsos Election Day poll of about 35,000 people.

"The freedom-loving Americans pushed back against the elites and the globalists. They might win in the long run, but we're not dead yet," said Andrew Dye, 48, of Dexter, Michigan.

"I think this big country is getting a little too far left a little too quickly and some people finally woke up and said enough," said Dye, a partner in a small management consulting firm.

Cuban-American Sarah Gird, 67, described herself as an independent who had felt let down after twice voting for Democratic President Barack Obama.

"I'm not conservative at all," she said. But Obama "didn't produce anything." In contrast, she said she trusted Trump would fix the economy.

"I think he's sincere, he's truthful, he means what he says," said Gird, adding she thought Trump would address poverty and jobs in African-American neighborhoods.

For many, the vote was a rejection of Clinton, whose use of a private email server during her time in government came to symbolize what is wrong with Washington.

"All the corruption. I'm tired of business as usual, being sold out all these years," said Kevin Barrett, 57, in Nashville.

Tom Kipp, 53, an architect also of Nashville, said he voted for Trump because "we need somebody in there not beholden to anyone."

"Our checks and balances system is beyond being compromised. I don't say he's my prime candidate, but he's my best option," Kipp said.

Others found Trump's promise to build a wall on the southern border with Mexico appealing.

"Last-minute decision: I changed my mind to Trump," said Lisa Ciafone, 48, of Madeira Beach, Florida, citing her concerns about illegal immigration and the rising costs of health insurance. "It made me lean towards Trump."

Vicki DeLira, 54, a dental hygienist from Schererville, Indiana, grew up a Democrat but voted for Trump because it was time for change even if it means "a little bit of chaos."