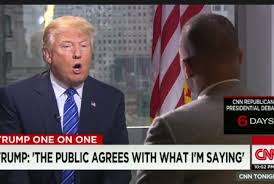 Herewith, a dissent. Whatever happens Tuesday, Trump has made history and has forever changed American politics.

Though a novice in politics, he captured the Party of Lincoln with the largest turnout of primary voters ever, and he has inflicted wounds on the nation's ruling class from which it may not soon recover.

Bush I and II, Mitt Romney, the neocons and the GOP commentariat all denounced Trump as morally and temperamentally unfit. Yet, seven of eight Republicans are voting for Trump, and he drew the largest and most enthusiastic crowds of any GOP nominee.

Not only did he rout the Republican elites, he ash-canned their agenda and repudiated the wars into which they plunged the country.

Trump did not create the forces that propelled his candidacy. But he recognized them, tapped into them, and unleashed a gusher of nationalism and populism that will not soon dissipate.

Whatever happens Tuesday, there is no going back now.