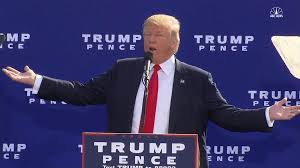 "She could barely reach her car, so I think we should take a drug test'"

Trump said he was willing to take drug test. The GOP nominee often raises questions about whether Clinton has the stamina and strength to serve as president.