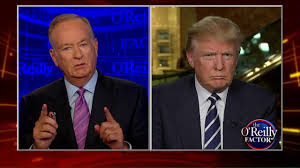 Trump had some harsh words for the Republican establishment last night during an interview with Bill O'Reilly of Fox News.  Asked whether he thought he would get the support of the GOP if elected Trump said, "Yes", although speculated that Ryan would lose his speakership position saying "maybe he'll be in a different position."  In the end, Trump concludes "So look, I don't want his support, I don't care about his support."

"They'll be there. I would think that Ryan maybe wouldn't be there, maybe he'll be in a different position."

"The fact is, I think we should get support and we don't get the support from guys like Paul Ryan."

"He had a conference call yesterday with congressmen with hundreds of them and they practically rioted against him on the phone. One person stuck up for him. So I'm just tired of nonsupport and I don't really want his support."

"This happens all the time – if you sneeze [Ryan] calls up and announces, 'Isn't that a terrible thing.' So look, I don't want his support, I don't care about his support."