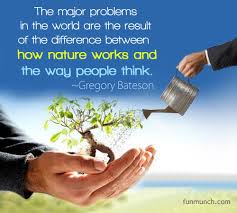 No sentence better summarizes the social plight we humans face than that penned by Gregory Bateson: "the major problems in the world are the result of the difference between how nature works and the way people think."  As our centrally-directed, vertically-structured systems of institutionally-imposed order continue to reveal their destructive character, thoughtful minds are becoming increasingly aware that the rest of the universe functions in a quite orderly fashion, without the conscious design of political agencies, academicians, special interest-directed "experts," and other self-appointed "authorities" over their fellow humans.

To the extent we identify ourselves (i.e., derive our sense of being, our sense of "who" we are) with external forces ((e.g., a tribe, nation, political system, religion, ideology, or other collective entity) our lives quite literally become an abstraction, an idea. The man who, at a business conference, introduced himself as "I am Xerox," is an example of this syndrome. So, too, are the millions of men, women, and children, who have been carefully conditioned to think of themselves as indistinguishable from the political systems of whose purposes they are willing to kill or die. The person whose car is emblazoned with a bumper sticker that reads "proud parent of a Marine," is advertising to the world that he or she has fulfilled their duty of helping to train their child to become a fungible resource for the owners of the state to dispose of as suits its interests. When Louis XIV reportedly declared "I am the state," his words were, for him, a cost-free declaration with which he stood to profit from the millions of subservient French people for whom such an idea, internalized for themselves, was wholly destructive to their personal being.

We are social beings who could not survive without some form of cooperative organization with others. This basic fact is confirmed in the birth of a child, in which the mother's body releases the hormone oxytocin – popularly called the "hug" hormone – that induces the mother to love and care for the child. Were it otherwise, and were the mother able to expel the baby with no more regard for its well-being than might otherwise attach to vacating bodily waste, the human species would have expired tens of thousands of years ago.

The practices in which we engage – along with the ideas that rationalize such behavior – confirm Bateson's insight. So, too, do the words of the late Richard Weaver who observed that "ideas have consequences." Our minds may be capable of concocting an endless supply of self-deceptions to which the forces of nature will not oblige themselves to conform. Intelligence – the factor that we humans like to imagine separates us from other life-forms – often leads thoughtful persons to identify the source and character of such forces. When our ancestors abandoned the idea of a geocentric universe – grounded in the daily experiences of the sun appearing to orbit the earth – in favor of a heliocentric model, humans were confronted with that ceaseless conflict between the dynamics of nature and our thoughts about how the world works.