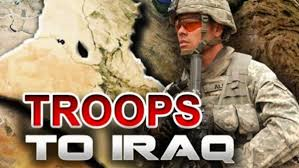 The escalation, which has been approved by the White House, suggests the challenges U.S.-backed Iraqi ground forces will face in assaulting a heavily defended major urban center that is Islamic State's self-declared capital in Iraq and the largest city under its control anywhere.

An Iraqi victory in Mosul would effectively end Islamic State's self-declared caliphate in Iraq. President Obama would like to see the militants ejected or defeated in Iraq before he leaves office in January.

The Pentagon has about 6,000 troops, mostly operating as advisors and trainers, in Iraq. U.S.-led coalition warplanes based outside Iraq have carried out thousands of airstrikes since mid-2014.

Most of the new U.S. troops will be deployed to Qayyarah, an Iraqi airbase known as Q-West about 40 miles south of Mosul that has become a key staging base for the planned assault. Some also will be deployed to the Al Asad base, which is further west in Anbar province, to help with logistics.