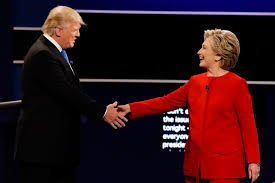 I thought Trump did poorly.

Trump missed a chance to go after Hillary about Libya, especially her statement "we came, we saw, he died" in which she bragged about killing Gaddafi. Libya erupted in a civil war following that event and terrorists are running the country. Well done Hillary.

Trump also missed a chance to attack the Clinton Foundation.

Trump faced three gotcha questions, and Hillary zero. On those grounds, the debate was quite a bit biased. Still, Trump missed a golden opportunity on some of the questions.

On the nuclear war issue, Trump should have commented "Hillary has supported every war every time."