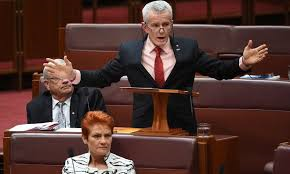 One Nation senator Malcolm Roberts has urged Australia to mimic Britain's Brexit and leave the "socialistic, monolithic" United Nations during his first speech to Parliament, in which he also compared himself to Socrates and said there was no link between carbon dioxide and climate change.

Praising Britain's recent decision to leave the European Union, which had the power to set laws and regulations affecting domestic laws in member countries, Senator Roberts called on Australians to launch an "Aus-exit" from institutions including the UN and International Monetary Fund.

"Australia's values and way of life are also at risk from insidious institutions such as the unelected swill that is the United Nations," he said.

"The EU is a template for total socialist domination of Europe through unelected bodies, such as the IMF, forcing their frightening agenda on the people. It is also the UN's template, and Australia must leave the UN."

"We need an Aus-exit," he declared.