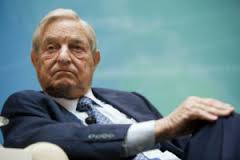 George Soros's Open Society Foundations is seeking to expand the use of electronic and online voting systems nationwide, according to a leaked Foundations document reviewed by Breitbart News.

While the directive was issued two years ago, the issue of electronic voting has become a hot button topic in this year's presidential election amid fears digital voting systems can be compromised.

The online voting plan was contained in a 67-page hacked file detailing the September 29-30, 2014 Open Society U.S. Programs board meeting in New York.

A significant portion of the board meeting was dedicated to methods the Foundation's U.S. Programs (USP) could use to further the use of President Obama's executive action authority to bypass Congress during Obama's final two years in office.

The Open Society, together with partner grantees, assembled a general list of potential presidential executive actions on numerous issues. Significantly, the Soros-backed group zeroed in on the expansion of online voting.

"USP will continue to fight against efforts to restrict voting rights, while supporting steps to improve voter participation and modernize voting procedures, such as on-line and same-day registration and expanded early voting. The Brennan Center, Demos and other grantees have engaged in litigation to expand access to registration and improve ease of voting."

The document listed a number of executive action steps that the Obama administration could take to "ensure greater participation by eligible voters," including online voting:

• Issue guidance interpreting the Americans with Disabilities Act with respect to accessibility of polling places, privacy when voting, and competence requirements.

In January 2014, Obama's 10-person Presidential Commission on Election Administration released its recommendations for reforming the U.S. election process, including transitioning to voting via tablet computers and other technologies.