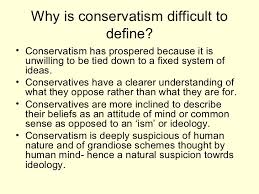 "The problem with American conservatism is that it hates the left more than the state, loves the past more than liberty, feels a greater attachment to nationalism than to the idea of self-determination, believes brute force is the answer to all social problems and thinks it is better to impose truth rather than risk losing one's soul to heresy. It has never understood the idea of freedom as a self-ordering principle of society. It has never seen the state as the enemy of what conservatives purport to favor. It has always looked to presidential power as the saving grace of what is right and true about America."

Lew Rockwell summed up the intellectual and moral poverty of the conservative movement with this short paragraph in a Mises Daily article ten years ago. It endures as a powerful statement against any ideology, conservative or otherwise, that would legitimize lording power over others. Mr. Rockwell's lines are frequently quoted, such as in Laurence Vance's recent article on conservatism compared to libertarianism.

We can clearly see the truth in this statement today. Rockwell would surely admit that this does not describe all conservatives at all times. "Old Right" thinkers like Albert Jay Nock and H.L. Mencken recognized that our enemy is the state. Those who identify as "conservative" yet recognize how statism wreaks such havoc upon the world can certainly be our fellow travelers. Nevertheless, what conservatism has become in modern America reflects very well Mr. Rockwell's biting criticism, and our attention naturally turns to how Donald Trump and the Trumpian conservative epitomizes such philosophy.

"… it hates the left more than the state." Instead of exposing how the state, the system that conservative Republicans themselves helped design, manage, and maintain, thwarts liberty at every turn, conservatives repeatedly cast the blame onto their co-conspirators against liberty: the Democrats! It is an elaborate scapegoating effort designed to rile up their base in order to consolidate their power yet again. As Dr. Ron Paul has repeatedly said, we don't have a two-party system but a one-party system. Which flavor of authoritarian would you like this cycle?