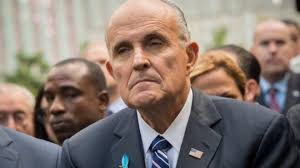 After stepping down as mayor of New York City, Rudy Giuliani tried to launch himself as a national political leader on the back of the single defining event of his career.

In the end he failed miserably, with voters immediately seeing his ploy for what it was: base political pandering.

But what many do not realize is that Giuliani's case is not just that of another ghoulish politician parading on the corpses of those who died on his watch for his own political gain.

On the day of 9/11, while the remains of the twin towers and WTC7 were still smoldering, one of Mayor Giuliani's first concerns was clearing away the evidence from the crime scene.

RUDY GIULIANI: "We were able to move 120 dump trucks out of the city last night, which will give you a sense of the work that was done overnight."

1st NY RESIDENT: It's wild out here. They just keep coming look! It doesn't stop. There's more, I keep thinking it's the end but an it's not."

Despite reassurances that the rapid removal of the evidence from Ground Zero was important for emergency access, this process went far beyond merely clearing a path for rescue workers. As Erik Lawyer, founder of Firefighters for 9/11 Truth points out, the massive operation to haul away over 1.5 million tons of debris and to sell much of the steel to Chinese firm Baosteel at discount prices was not just an overzealous approach to clearing the area, but was itself a crime.

ERIK LAWYER: "9/11 was the greatest loss of life and property damage in U.S. fire history. This should of been the most protected, preserved, over-tested and thorough investigation of a crime scene in world history. Sadly it was not. What was it? Well, we know from their (NIST) admission the majority of the evidence was destroyed. Like Richard (Gage) said, (in) 22 years of experience I've seen a lot of crime scenes, I've never seen anything like this in my life.I was out at the site, I saw trucks leaving faster than anywhere I've ever seen but I accepted it at the time and for years I accepted it because it was a recovery and rescue operation and that's normal to have something like going. Again, we'd never seen anything like it but that was expected.

"What I didn't know for years was what was going on behind the scenes was that evidence was being destroyed when it was shipped off. By their own admission, the NIST investigation of Tower 7  had no physical evidence. How do you investigate a crime when you've destroyed all the evidence? It doesn't make sense.

Needless to say, an investigation of the 9/11 crime scene following the national investigation standards has never been conducted and never will be as Giuliani oversaw the illegal destruction of the evidence itself.

To add insult to this injury, in 2003 New York City Medical Examiner Charles Hirsch revealed that in the mad scramble to get rid of the crime scene evidence, human remains from the World Trade Center had been left at the Fresh Kills landfill [some footage HERE around 10min mark] where the debris was sorted and the steel was sold. In 2007 Eric Beck, a senior supervisor of the recycling facility that sifted the debris, admitted that some of those human remains ended up in a mixture that was used to pave roads and fill potholes in New York City.

But as grotesque as such revelations are, they are not the most shocking part of Giuliani's 9/11 story.

In the late 1990s the Mayor oversaw the creation of a state-of-the-art $13 million emergency command center to coordinate the city's disaster recovery and response efforts. Located on the 23rd floor of World Trade Center Building 7, just across Vesey Street from the Twin Towers, the center — dubbed by local press at the time as "Giuliani's bunker"– included reinforced, bulletproof, and bomb-resistant walls, its own air supply and water tank, beds, showers to accommodate 30 people, and three backup generators. It could be used to monitor all of New York's emergency communications frequencies and was staffed 24 hours a day.