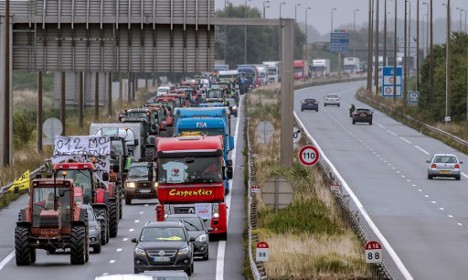 French farmers and truckers blocked the main routes in and out of the port of Calais on Monday to call for the
closure of the sprawling "Jungle" migrant camp.

Around 70 trucks mounted a "go-slow" on the A16 motorway -- the main artery for freight and passengers heading for Britain either via the Channel Tunnel or on board ferries from the port.

Under a light drizzle, the trucks were joined by a line of farmers on their tractors, bringing to a near-standstill the route used by trucks from all over Europe to reach Calais.

Despite the large tailbacks, many motorists passing the other way sounded their horns in support.

"We've had no answers, so we're blocking things up," said Frederic Van Gansbeke, who represents businesses and shop-owners in Calais.

The Jungle, a squalid camp of makeshift tents and shelters, is home to some 7,000 migrants but charities say the number might be as high as 10,000 after an influx this summer.

Migrants from the camp often use tree branches to create road blocks to slow trucks heading for Britain, their destination of choice.