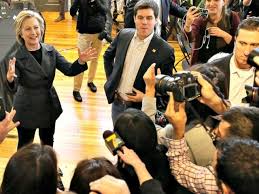 Hillary Clinton's Attack on Breitbart News is an Attack on Press Freedom … Hillary Clinton has a new target in her campaign against Donald Trump: Breitbart News. Her goal is not just to use Breitbart as a political foil, but to shut the site down entirely. Deputy communications director Christina Reynolds sent a fundraising email earlier this week claiming that while other conservative news outlets had a "right to exist," Breitbart News did not.  – Breitbart

Hillary's recently fundraising email has attracted huge coverage in the media. But when one actually reads the text of the email, it is at least questionable as to whether she (or her deputy director who signed the letter) meant exactly what Breitbart (above) states.

Breitbart's execs and journos feel understandably attacked, but their reporting, nonetheless, presents what seems to us as one interpretation.

Other articles and YouTube commentaries have gone further than the Breitbart article, presenting the statement as if it had said outright that Breitbart (and thus other alternative media) generally had no right to exist. One example (here).

Please note: This article is not intended  as a criticism of the alternative media (of which we'd like to think we are part) for it is often courageous and many elements represent a resurgence of credible journalism. We simply wish to suggest some alternatives regarding the reporting and also to offer some alternative scenarios.

This extends to Hillary's recent speech as well, in which she unfairly mentioned some alternative media by name and accused them of dealing in bigotry and racism. But the speech did not include direct references to censorship or outright banning – the expectation of which had been reported by some.

The intention was apparently to mingle Donald Trump's image and political philosophy with elements of a newly discovered media juggernaut ("alt.right") in order to further condemn him as a racist.

Hillary has done this before, explaining when her husband was president that the couple was subject to attacks from a "right wing conspiracy." Conflating criticisms and then identifying a fictitious, over-arching source is a way to trivialize attacks and undermine their credibility.

Once one has identified a conspiratorial mechanisms, then all subsequent attacks, no matter how relevant or credible, can be dismissed as part of the larger conspiracy.

But the larger concern regarding Hillary's latest characterizations is probably not that Hillary will unconstitutionally attempt to impose blanket censorship but something else, as we suggest below.

The memo (as it seems to have been issued and sent) is apparently  reproduced here by WeAreChange.com.

This is what it says:

Whenever you hear about a right-wing conspiracy theory somehow making its way into the mainstream of political dialogue, there's a good chance that Breitbart News had something to do with it.

Never heard of Breitbart News? It's a fringe website where there's no opinion too ugly, too divisive, or too outright crazy to be worth breathless promotion.

The one about President Obama being a secret Muslim born in Keyna? Breitbart was all over that story.

Or maybe you heard about the time they attacked an opponent – a conservative Republican no less – by calling him a "renegade Jew."