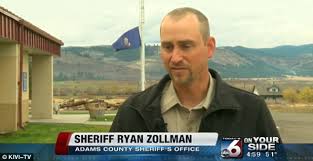 Residents of Adams County, Idaho, should compel Sheriff Ryan Zollman – by nailing his feet to the floor, if necessary — to answer this question: Are you willing to tell Donna Yantis to her face that her husband Jack deserved to die?

If Zollman answers that question in the negative, he should be forced to answer this one: Are you willing to fire the deputies who perforated Jack Yantis with gunshots, even though they will be spared criminal prosecution because they killed an innocent man?

Assuming that Zollman isn't willing to do either of the foregoing, he should candidly admit to the public supposedly served by his office that their lives are less valuable than those of his deputies; that the testimony of a local citizen is never to be credited when that citizen accuses deputies of misconduct; that the personal safety of his deputies is the only important consideration in any encounter with a member of the public; and that he is willing to protect the job security of deputies who have exhibited lethal incompetence even when this means putting the public at avoidable risk.

If he were any part of a man, Zollman would have fired Deputies Cody Roland and Brian Wood immediately after last November's fatal shooting. Instead, he is accusing critics of his department of enlisting in the mythical "war on police."

"It's clear that in the nation, law enforcement, we're under attack, and we just have a reason here in Adams County," simpered Zollman in a television interview shortly after Idaho Attorney General Lawrence Wasden made the entirely predictable announcement that Roland and Wood would not face criminal charges.

Zollman invites the public to pretend that the deputies, not the man they killed without cause or the prospect of facing accountability, are the victims, their egos gravely wounded by criticism from the public that has continued to pay their salaries and – for reasons that defy my understanding —  retains an ingenuous belief in the legitimacy of their profession.