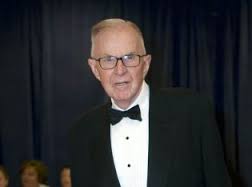 For when John yelled "Wronnng" at me from his center chair of "The McLaughlin Group," it hit with the same familiar finality I had heard, many times, from Jesuits at the front of the class at Gonzaga.

In that era, John was himself a Jesuit teacher at Fairfield Prep, where the black cape he wore and his authoritarian aspect had earned him from his students the nickname — Father God.

In 1970, Fr. John heard another calling, and, declaring himself a liberal Republican, challenged Sen. John Pastore in his home state of Rhode Island. An unamused Sen. Pastore obliterated John by two-to-one.

It was right after this election, while I was vacationing in the Bahamas, that, one morning, I encountered Father John in his Bermuda shorts at a hotel newsstand on Paradise Island.