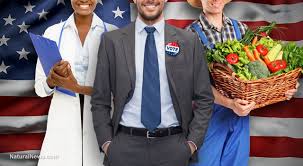 (NaturalNews) Every Natural News reader agrees on the fundamental principles of health freedom, food freedom and medical freedom. We all believe in the basic human right to grow our own food, save seeds, choose the medical treatments of our choice and say no to medical interventions -- such as organ harvesting, vaccine interventions or forced euthanasia -- we wish to reject. We also agree with the right to know what we're eating (honest labeling), the right to access natural medicine and the right for parents to decide the best medical strategies for their children.

Now here's the big question for everyone: Do you realize that NONE of these rights can coexist with a totalitarian government that despises individual freedom and liberty?

To understand the really big picture in all this, you must first realize that there are only TWO groups of people in modern society:

2) The commoner class. (That's you and me and all the taxpayers, W-2 wage earners, unemployed citizens and everyone else who isn't part of the elite.)

The entire aim of the political class is to control, enslave and exploit the commoner class while maintaining their own power and corruption.

In order to do this, the political class must strip away all the fundamental freedoms the commoners once enjoyed: Freedom to choose your health care provider, freedom to grow your own food, freedom to collect rainwater, freedom to own a piece of land free and clear, freedom to say NO to organ donations (harvesting), freedom to carry a firearm for self-defense, freedom to engage in cash transactions, freedom to travel on public roads, and even freedom from government surveillance.

Both the Bush and Obama administrations have worked diligently to accomplish this task. The ultimate goal is the complete stripping away of freedom of speech (via the social enforcement of political correctness), the elimination of food honesty (the anti-labeling Dark Act 2.0 just signed by Obama), the elimination of the Second Amendment (via false flag massacres and blaming lawful gun owners for the events), the criminalization of food freedoms (arrests of raw milk producers or hemp farmers) and even the jailing of journalists in America who exercise free speech that challenges the status quo.

The march of tyranny has already taken a huge toll in America, and it's only going to get worse if establishment politicians continue to win elections.

Politics matters: You cannot have food freedom and health freedom without political freedom

This is why politics matters: Health freedom, food freedom and medical freedom simply cannot survive the efforts of the political establishment to stomp out freedom and replace it with their demands for mindless obedience.

2 Comments in Response to Why politics matters: There can be no health freedom, food freedom and medical freedom...

Basic human rights is where it's at. Anything that is important at all, is too important to be left up to government.We each have to take our own responsibility for survival. Most folks my age expect SS to take care of them. I'm not so naive. When it doens't work out, they may "march in the streets" like we did in the anti-war movement, but it won't be the same. For ne thing, I am willing to march in protest to other people's subrogation. I am not going to march to demant their paying me! I find that concept abhorrent.(That doesn't mean I won't cash any checks they send in exchange for my years of servitude. It just means that I am not in agreement with their programs, their methods, or their philosophy. Whenever I see a place where I have the power to "just say no" to their monopoly of government, I try to take it. The only one that works for me is to Refuse to Assent to their Rule by Refusing to Vote. El Veto-Voter HaltVote.com

In all the sciences, truth prevails. If it isn't known, it is called a theory. If it is a fact it is called a law. Political science is the only science that has as one of its basic tenets, "If you can't succeed any other way, lie." The problem with the other sciences is, political science has penetrated them, to make them look like something they are not. :)