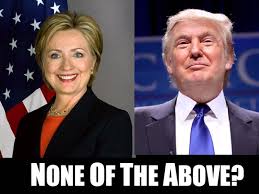 As I've argued many times in the past year, there is plenty of evidence suggesting these skeptical Americans are, indeed, onto something with their suspicions.

But the corporate media has come out in defense of America's "democracy" — and political elites are defending the system, too. In the wake of Trump's recent rhetoric regarding the "rigged" system, the ruling class of the United States is peddling the fiction that somehow Trump's irresponsible sensationalism is solely to blame for the newfound feelings of illegitimacy plaguing our elections.

And while Bernie Sanders fades into the matrix with his endorsement of Hillary Clinton and recent decision to hit the campaign trail for her, many of his supporters feel the same way Trump supporters feel. The Democratic primary was rife with inconsistencies, voter suppression, and suspect voting machines — all of which have culminated into several high-profile lawsuits alleging wrongdoing by the DNC. Coincidentally, Shawn Lucas, the man who was spearheading one of the lawsuits, was recently found dead on his bathroom floor. But this is all Trump's fault, right? Or maybe Russia's?