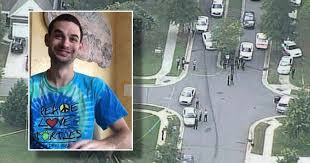 Upon exiting his vehicle, this deaf man was shot and killed. If police were taught to de-escalate situations rather than react out of fear, he might still be alive.

It's been argued that the reason Norway police are so much more effective at their jobs than cops in the U.S. is because the undergo three years of training and learn to de-escalate situations, whereas cops in America receive only a fraction of the education and tend to react out of fear rather than respond rationally.

The statistics back up this argument. Every day, U.S. police kill more people than Norwegian cops have in the past ten years. Perhaps if law enforcement officials were educated differently, a deaf man named Daniel Kevin Harris might still be alive today.

According to WCNC, Harris was shot dead by a State Trooper in North Carolina this week. Reportedly, the State Trooper had attempted to pull over Harris' vehicle but for an unknown reason, the deceased did not stop. He instead drove to his home.

When both vehicles pulled up to Harris' home, they were both damaged. A neighbor, Mark Barringer, told the press:

"I was here in my driveway and I saw the highway patrol car come through and it was smoking really bad. About 10 seconds later, I heard one gunshot."

That gunshot was fatal. Barringer says he went to take a closer look after hearing the noise and found Harris in the middle of the street, just feet away from his front door.

"It was surreal, you just don't expect to see something like that. When the gunshot went off, it was scary."

Since the tragic event, neighbors have put flowers near where Harris took his final breaths.

While the Detectives say the State Trooper and Harris got into "an encounter" before he fired his weapon, neighbors relay that the deaf man was shot immediately upon exiting the vehicle. They believe he was trying to communicate via sign language before he was killed.

Barringer agrees that if police were taught to de-escalate situations rather than react on gut impulses, Harris – and likely Alton Sterling and Philando Castile – would still be alive. He says:

"They should've deescalated and been trained to realize that this is an entirely different situation, you're pulling someone over who is deaf, they are handicapped. To me, what happened is totally unacceptable."