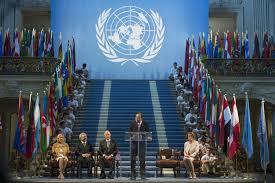 Every wonder what can possibly happen on a foreign aid humanitarian mission? Well, have a look. Now, I don't want to make fun of this because this is a horrifying thing and the survivors will be in a living hell. But I will say this: I humbly suggest that every American demand our money back from the United Nations. How long have we been carrying water for this pathetic joke of a "peacekeeping force" that can't seem to keep any peace, defend anybody, or stop "Never Again" from never again and again and again all over the place?

It seems that even the United States government itself peed down their pants leg about trying to stop the actions of what amounts to a terrorist group. They threw these people under the bus. Or, under the white-painted UN armored personnel carrier, such as the case may be. I would imagine the UN peacekeepers were too scared and too busy doing bong hits in those APCs to bother responding and doing their frickin' jobs. Who was in charge of changing their diapers that day, anyway?Excuse me, but we can understand the UN wetting their pants at the thought of firing their own weapons. But what happened to the tough guys in the U.S. government that talk so tough you'd think they bite the heads off of animal crackers day and night?

Now, I would say that people really better think twice about serving in certain places overseas. Especially places where the kids probably get an AK-47 and a party-pack of grenades for their coming out party. Yes, it's sad. Yes, it's tragic. But in many cases, I'm sorry, but there's not much you can do on the ground. And how about the fact that the United Nations is just a paper tiger? Think you can count on those blue-helmeted clowns to rescue anyone? Sometimes, those UN peacekeepers are the ones forming up rape gangs themselves. See, unarmed women are about all that a UN peacekeeping force can engage and survive without surrendering.

Why are we even in the United Nations? Hasn't the time come to pull the plug on this Frankenstein of foreign policy? This experiment has failed. It's time to scrape the smelly slime off the petri dish into the trash and chalk it up to big idea, small results. Wasn't the original idea of this sham force of tin soldiers to park them between two combatants in a war to create a buffer zone? How'd that work? I think this didn't work out so well in the Suez Crisis. Not until Soviet head honcho Nikita Khrushchev threatened to nuke London and Paris did this crisis end. Not because of the UN. It was because President Eisenhower was crapping bricks about this crisis blowing up into a nuclear war (pardon the pun.) So he ordered the British, French, and Israeli troops out of the pool and the Soviets and Egyptians had a good laugh at snookering the West and causing a NATO family feud. Right, but the UN sent in a peacekeeping force afterwards to go over there and look like they had actually done something. Besides peeing their pants, that is.

Excuse me, but since when has the UN been effective at anything other than wasting vast sums of cash on senseless projects and missions that accomplish little but employ legions of smug dorks with liberal arts and humanities degrees? I suppose if we wish to know the cultural legacy of some little known tribe in the Amazon (who actually wished to be left alone and not harassed by UN anthropologists), then the UN might have merit upon which to boast. But when you were not able to stop several genocides with UN troops just a hop, skip, and a road march away, you have nothing whatsoever of which you may glorify yourself. And what wars have you managed to stop? None. You have brokered cease-fires, which were periods where the combatants were able to rebuild their forces and repair their armored vehicles to then re-enter hostilities as UN peacekeepers squatted in bunkers and filled their collective pants.

To this worldwide welfare organization we should continue paying?! Our tax money should continue funding this obscene joke of a "League of Nations"? I haven't forgotten that the League of Nations, which is the grand-daddy of the United Nations, failed to stop World War Two. What, the weapons inspectors just happened to miss all those panzer divisions and squadrons of Stukas just sitting there? And the world had to resurrect this world government cadaver and pawn off this farce as the United Nations? Beg pardon, but this is the sequel to the League of Nations.