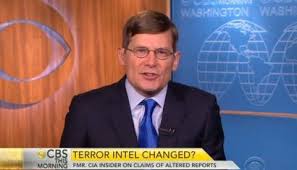 Last week the US House of Representatives Joint Task Force released their initial findings on the intelligence analysis of the US Military's Central Command (CENTCOM). The report found that, among other things, CENTCOM leaders "distorted, suppressed, or substantially altered analytic products" to paint US efforts to combat ISIS in a more positive light. Moreover, 50 percent of analysts within CENTCOM said that the "procedures, practices, processes and organizational structures hampered objective analysis" while another 40 percent said they had experienced attempts to "distort or suppress intelligence" within the past year.

The annual Analytic Objectivity and Process Survey , directed by the ODNI, was conducted from August through October 2015, and included responses from 125 analysts and managers within CENTCOM. The survey results were significantly worse than those of other IC agencies or COCOMs, and showed that a substantial number of CENTCOM respondents felt theirsupervisors distorted, suppressed, or substantially altered analytic products. Over 50 percent of analysts responded that CENTCOM procedures, practices, processes and organizational structures hampered objective analysis, and 40 percent responded that they had experienced an attempt to distort or suppress intelligence in the past year. Yet despite receiving these results in December 2015, CENTCOM and IC leaders did not take corrective actions to address many of the issues identified in the survey results

Frankly we're shocked by these findings which seem to suggest that the military intelligence gather process is motivated less by gathering quality intelligence intended to keep our country safe and more by political pressure intended to help re-elect the incumbent party to the White House.

Investigative reporter Aaron Klein of Breitbart conducted a thorough review of the House report and found many other troubling discoveries. Below is a review of a couple of his most shocking findings.

1. Senior leaders were found to modify intelligence assessments to cast a positive spin on CENTCOM efforts to train the Iraqi Security Forces and combat the Islamic State

...senior leaders within the CENTCOM Intelligence Directorate and JIC, including the Director of Intelligence and other senior intelligence staff, violated regulations, tradecraft standards, and professional ethics by modifying intelligence assessments to present an unduly positive outlook on CENTCOM efforts to train the ISF and combat ISIL.