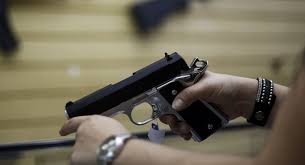 The new police data shows that Germans are feeling increasingly unsafe in the wake of recent lone-wolf attacks and shootings, which has sparked a demand for non-lethal self-defense weapons.

"As of June 2016, there were 402,301 small arms carry permits in the National Weapons Register," the Interior Ministry said, as cited by Die Welt.

This figure is almost 50 percent higher than last year when there were just fewer than 270,000 requests for permits in the first half of 2015.

Small arms carry permits or "Kleiner Waffenschein" in German, are restricted to non-lethal self-defense weapons, such as blank-firing and gas pistols, and flare guns.

But in a country with one of the strictest weapons laws in Europe, such permits are much easier to obtain, as they do not require background checks, safety classes, psychiatric evaluation and proficiency tests, which are mandatory for obtaining a firearms license.