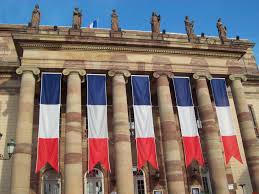 How should France answer to the horror in Nice? The country is now deeply entrenched in a long-term war with few hopes of dodging future attacks. The anger of the French population is understandable. But booing a prime minister at the commemoration ceremony for the loss of innocent lives is not the smartest idea.   No intelligence service could have prevented the Nice attack as nothing in the profile of the lunatic who drove over 84 people could have suggested a potential link to terrorism. – Al Jazeera

We've been writing regularly about the meme of "evil Islam" and our perspective that it propaganda – a dominant social theme – intended to create military tension, further authoritarianism and even, eventually, wider wars setting the West against Islam.

You can see our articles HERE and HERE And HERE too.

The lie is that Islam of itself is a terrible threat to the French – and Western – way of life.

The lies are propagated by a tiny group of people who organize fallacious themes that then become Western policy.

Global warming, the economics of central bank – and the dangers of Islam – are all examples of these themes.

The lies are regularly expanded and deepened.

"We are on the verge of a civil war."

Calvar is actually describing a war that he likely wants. The whole idea of the Evil Islam exercise is to polarize Europe in preparation for increased globalist solutions.

The anger of the French population is understandable. But booing a prime minister at the commemoration ceremony for the loss of innocent lives is not the smartest idea.

If the French were booing the prime minister because they understood the manipulations taking place, that would be a positive development.

But no doubt the French in question were booing because they believed the state had not taken a firm enough stance against "radical Islam."

Unfortunately, it is the state that has created the problem, starting with the forcible absorption of Algeria that later gave rise to the Algerian War of Independence, (1954–62).

This war was a bitter one and many of the "Muslims" in France are from Algeria. They still don't like the French establishment.

The antipathy that French Algerian Muslims harbor has been used by the mainstream media as evidence that Muslims cannot be absorbed into France.

The "Islam versus the West" meme is filled with lies.

There are as many questions about the Paris attack in France as the one in Nice.

When it comes to the recent horrible attack in Nice, photos and videos seem to show no blood on the truck. Go look on the Internet for yourself.

Every large terror incident in France has had significant questions attached. Just as in the US, evidence is easily presented that these attacks are not what they seem.

It is no doubt difficult to accept that evil forces are manipulating events in Europe and the US so as to cause tension between Islam and the West.