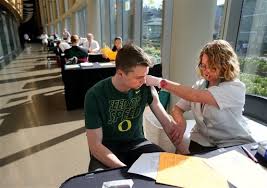 (NaturalNews) This year, the Centers for Disease Control and Prevention (CDC) is recommending for the first time that low-risk high school students receive the meningitis B (MenB) vaccine, first used in the United States in 2014. The recommendation is actually Category B, meaning that the CDC admits the shot might not be for everyone, but suggests that doctors talk the option over with patients.

Of course, such nuance will rapidly disappear as states transform the recommendation into a mandate; Missouri, for example, will not allow 12th graders to begin school this year unless they have received the MenB shot.

As with many new vaccines, vaccine promoters are exaggerating both the importance and the effectiveness of MenB. In fact, a study recently showed that MenB may not even protect teenagers against real-world meningococcal outbreaks.

Vaccine useless in a third of cases

MenACWY, the older vaccine, has long been recommended for children ages 11 through 18, with an initial shot at age 11 or 12 and a booster at age 16.

MenB is now recommended for adolescents aged 16 to 23, with ages 16 to 18 considered "ideal." The shot is given in two or three doses over the course of two to eight months.

Just how effective is MenB? Not very, according to a recent study conducted by researchers at the University of Minnesota, Princeton University and Public Health England, and published in the New England Journal of Medicine.

The researchers collected blood samples from more than 600 students at a New Jersey university during a 2014 MenB outbreak, which marked the first U.S. use of the MenB vaccine. The researchers found that one-third of fully vaccinated students showed no immunity to the MenB strain involved in the outbreak, even though they showed significant immunity to two MenB strains used to develop the vaccine.

The findings suggest that the MenB vaccine may only be of limited usefulness against certain strains, the researchers concluded, and cautioned that many vaccinated people are probably still able to catch the disease. The researchers urged vaccinated adolescents to remain aware of the symptoms of meningococcal disease, and to seek treatment if they start to exhibit them.

How worrisome is MenB?

Don't look for vaccine proponents to tell parents or young adults that the MenB vaccine may not protect a third or more of people from real-world outbreaks. Instead, look for more and more states to add MenB to their list of "required" vaccines for school attendance.

1 Comments in Response to CDC releases new meningitis B vaccine mandate for students, despite...

Calling my College kids Primary for their Annual Physical and asking, "While they're there can they get the MenB vaccination?" To my surprise, they don't have it. Not that they're just out of it, but they do not carry it! Where do I go from here? We see the commercials and I receive newsletters from CDC BUT there is no help about where to go!? Sincerely, Concerned Mom