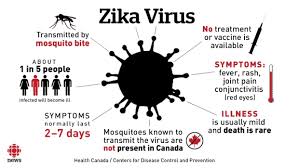 President Obama asked Congress for $2 Billion to research the Zika virus.  Thankfully, we have a do-nothing Congress who has yet to fund the Center for Disease Control's (CDCs) request for Zika research.  I posted an earlier blog about the Zika issue here.

Zika refers to the virus spread by mosquitos.  It was first described as coming from the Zika Forest of Uganda in 1947.  Zika has affected many tropical countries including many in Africa, the Americas, Asia, and the Pacific.  And, over the last 70 years, there has not been an epidemic of microcephaly—children born with small heads, in any of these countries until a few months ago.  Microcephaly made headlines early this year when a Brazilian doctor reported an epidemic increase in children being born with small heads—microcephaly.  This doctor also noticed that many of the children who were born with small heads had mothers who were infected with Zika during their pregnancy.

The  Powers-That-Be, including the Center for Disease Control (CDC), and the World Health Organization (WHO) quickly jumped on this story in order to squeeze money out of the U.S.  The WHO declared Zika a global pandemic and the CDC promptly asked Congress for $2,000,000,000 dollars to study the illness and develop a vaccine against Zika.  A recent bill from Congress proposed spending about $1,000,000,000 studying and creating a vaccine for Zika.

Do we really need another vaccine against an illness that has never been proven to cause any serious illness, including microcephaly?

If Zika were responsible for causing the microcephaly epidemic in Brazil, where are the epidemics in all the other countries where Zika is endemic? For example, in Columbia, a recent New England Journal of Medicine study of nearly 12,000 pregnant women infected with Zika found zero microcephaly cases.  (1)

Clearly, there is something causing the acute rise of microcephaly in Brazil.  I doubt it is Zika.