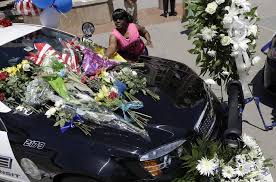 If it's not another false flag raging war on Islam, Russia, China or Iran, it's another Soros-Obama false flag attempting to instigate race wars in America and beyond. With financial assistance from his oligarch friends, the most divisive president in US history continues pitting blacks against whites, feds against patriots, Americans against immigrants, Christians against Muslims, and on and on this divide and conquer script goes. Last week's cop shooting in Dallas is the latest sick ploy to manipulate Americans into turning against one another, specifically designed to incite further civil unrest and violence across the nation. Our treasonous president can't hide the fact that he has been working overtime in his final months prior to the November election to aggressively promote a second civil war and his lame excuse to confiscate guns. Long before his meteoric rise, given marching orders as the Manchurian president, on cue the globalist puppet in the White House continues weakening the nation's strength and undermining America's stability.

During Obama's time in power, he has militarized police forces across our nation to combat readiness, killing far more unarmed citizens each year than any other industrialized nation. In the first 24 days last year, more Americans were killed by police than in the last 24 years in England and Wales. In March last year alone, US cops killed more Americans than UK police killed during the entire 20thcentury. More US citizens have been murdered since 9/11 by killer cops than US soldiers died fighting in both Afghanistan and Iraq. We are 58 times more likely to lose our life at the hands of those sworn to "protect and serve" us than by terrorists that the US government not-so-secretly created, funds, trains, arms, supplies and has regularly deployed as covert mercenary proxy war allies for nearly a half century.

All the so called "elected" (in reality globalist chosen) national leaders of the West are methodically, feverishly implementing both draconian and nation-destroying economic policies to bring both the Western middle class and freedom to their bitter end along with each country's waning national sovereignty, willfully demolishing the national, cultural and ethnic identity of Western countries for sake of racial and religious divide.

But the ruling elite expected to have its New World Order rolled out and fully in place years earlier this century, complete with a cashless society within a one world government. The global elite has taken some serious losses recently with the Brexit vote, the preeminent collapse of the EU, pending defeat looming over ISIS and due to Putin's intervention in Syria, hitting a brick wall in its globalized regime change operations per reversals in both Syria and Ukraine. In response to US Empire's imperialistic unipolar hegemonic aggressions, Russia and China have been forced to rapidly militarize in an unprecedented arms race and in allied partnership have eclipsed the US military prowess.  Meanwhile with their expanding Shanghai Cooperation Organization, BRICS alliance and the Asian Infrastructure Investment Bank, the Eastern powers are leading the charge successfully removing the IMF/World Bank and USD/petrodollar's longstanding monopolizing dominance. The unipolar days of the US Empire as the sole controlling geopolitical and economic kingpin are over. These significant setbacks have marked the beginning of the end of centuries of the Anglo-American-Zionist reign of tyranny and terror and earthly destruction at the hands of the globalists.

If It Bleeds It Leads: How the American Media Perpetuates and Profits from Mass Shootings

Unbelievable! The Feds Knew And Did NOTHING??