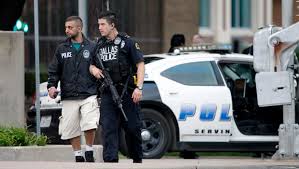 Five officers are dead — four Dallas police officers and one Dallas Area Rapid Transit officer — after police say two snipers ambushed and opened fire on police officers at the end of a peaceful protest against nationwide officer-involved shootings Thursday night.These officers have given everything to serve the citizens of Dallas, and our thoughts and prayers are with their families.Ron Pinkston, President, Dallas Police Association

Seven officers and two civilians were also injured in the shootings -- all are expected to recover.

Dallas Police Chief David Brown said Friday officers cornered a suspect and tried to negotiate with him for several hours before talks broke down. The suspect told police he was upset by recent police shootings and "wanted to kill white people."one per

After an exchange of gunfire, officers attached explosives to a bomb robot and detonated them near the suspect, killing him.