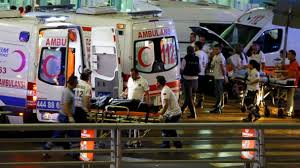 At least 36 people have been killed in an attack on the main airport in Istanbul, a senior Turkish official has told the Associated Press.

:: Click Here For The Latest On This Story As The Death Toll Rises To 41

Initial indications suggest Islamic State was behind the attack, the official said.

Figures suggested up to 50 people had been killed - however that has now been downgraded.

He said some 60 people were wounded. Six of those sustained serious injuries, the state-run Anadolu Agency said.

Two of the attackers detonated their explosives when police fired at them, a second official said, citing information from the interior ministry.

A witness told NBC News that he saw a police officer diving to tackle one of the attackers - who then detonated his bomb.

The attack is understood to have happened near the airport entrance - before the assailants would have gone through security checks.