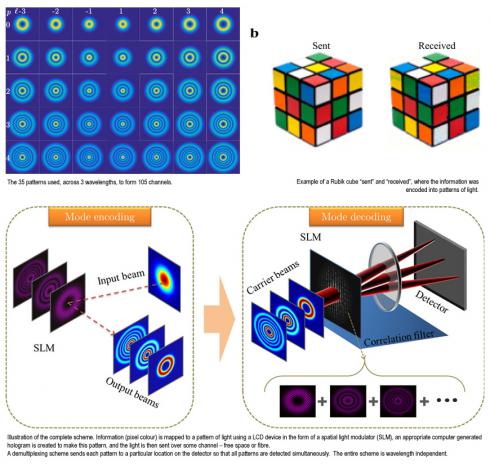 A research team demonstrates over 100 patterns of light used in an optical communication link, potentially increasing the bandwidth of communication systems by 100 times.

The rise of big data and advances in information technology has serious implications for our ability to deliver sufficient bandwidth to meet the growing demand.

Researchers at the University of the Witwatersrand in Johannesburg, South Africa, and the Council for Scientific and Industrial Research (CSIR) are looking at alternative sources that will be able to take over where traditional optical communications systems are likely to fail in future.

In their latest research, published online today (10 June 2016) in the scientific journal, Scientific Reports, the team from South Africa and Tunisia demonstrate over 100 patterns of light used in an optical communication link, potentially increasing the bandwidth of communication systems by 100 times.

The idea was conceived by Professor Andrew Forbes from Wits University, who led the collaboration. The key experiment was performed by Dr Carmelo Rosales-Guzman, a Research Fellow in the Structured Light group in the Wits School of Physics, and Dr Angela Dudley of the CSIR, an honorary academic at Wits.

The first experiments on the topic were carried out by Abderrahmen Trichili of Sup'Com (Tunisia) as a visiting student to South Africa as part of an African Laser Centre funded research project. The other team members included Bienvenu Ndagano (Wits), Dr Amine Ben Salem (Sup'Com) and Professor Mourad Zghal (Sup'Com), all of who contributed significantly to the work.

Bracing for the bandwidth ceiling....

PC Operating Temperatures: How Hot Is Too Hot?

Tesla Is "Paying In Advance" For Semiconductors And "Actively Considering" Buyin

Google Aims For Commercial Quantum Computer By 2029, What Would That Do To Bitcoin?