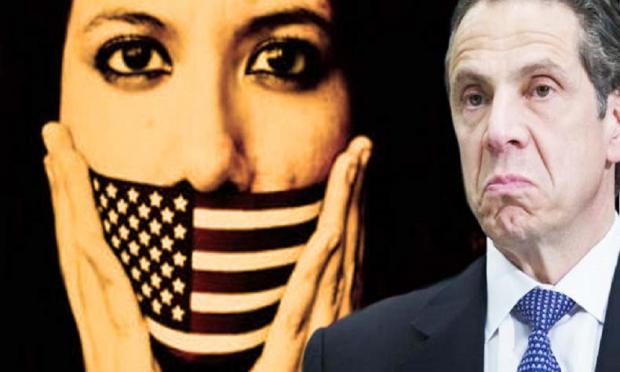 Claire Bernish / The Free Thought Project  New York Governor Andrew Cuomo feels strongly enough that Israel has been horribly bullied by the growing success of the BDS (boycott, divestment, and sanctions) movement, so he signed an executive order — quite likely unconstitutional in scope — in response.

"I am signing an Executive Order that says very clearly we are against the BDS movement. If you boycott Israel, New York will boycott you."

According to the Executive Order, the state Commissioner will subjectively compile a (black)list using "credible information available to the public" of institutions and companies participating in BDS — from which state entities will be required to, in turn, "divest their money and assets."

Though the sweeping move immediately garnered praise from the pro-Israel establishment, this quashing of free speech and expression — as well as free commerce — quite likely violates the Constitution. As many outlets quickly pointed out, the BDS movement closely resembles that against South Africa over its Apartheid policies in a number of ways.

As Ryan Cooper wrote for The Week, "Roughly 4.8 million Palestinians live under Israeli rule in the Left Bank and Gaza Strip, yet have no political representation in the Israeli government." Responding to what many call Israel's Apartheid, BDS has been gaining steam since its inception in 2005 to "push Israel into giving up the occupation through economic leverage."

But Cuomo's oppressively sweeping and subjective EO seeks to punish people for criticizing Israel in a peaceful, effective manner. And whether or not you agree with the BDS movement, understand Cuomo's personal views on Israel just became the law in New York State — and his complete bypassing the democratic process intimates the Governor's awareness such a policy wouldn't be tolerated if put to a popular vote.