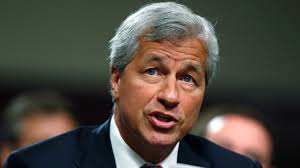 JPMorgan Chase & Co. Chief Executive Officer Jamie Dimon warned the investment bank may have to cut jobs in the U.K. if the country decides to exit the European Union in the referendum this month.

A so-called Brexit vote would result in long-term uncertainty for the U.K. and EU economies, Dimon said in a joint address to the bank's staff in Bournemouth with Chancellor of the Exchequer George Osborne on Friday. The bank has more than 16,000 employees across six locations in Britain, including back-office and support roles in Bournemouth, a British seaside resort 108 miles south of London.

"If the U.K. leaves the EU, we may have no choice but to re-organize our business model here," Dimon said in prepared remarks provided to Bloomberg. "Brexit could mean fewer JPMorgan jobs in the U.K. and more jobs in Europe."

The U.K. will vote June 23 on whether to remain part of the EU. Dimon joins others who have warned Brexit would push international securities firms to move jobs or activities because some products can't be traded outside the EU without specific agreements. Stuart Gulliver of HSBC Holdings Plc has said the lender would likely need to move 1,000 investment bankers to Paris because they're linked to operations governed by MiFID II, the EU rules covering everything from derivatives trading to bond pricing.

"One realistic outcome is that we lose the ability to passport our banking and trading services into Europe," Dimon said. "But our clients will still need us to trade within what will then be the EU. If that's what the rules say, we will need to do what works."

Dimon said in a question and answer session that some EU countries may require the bank to move jobs to the continent if Brexit occurs. The EU is one of the great "human endeavors," Dimon said.