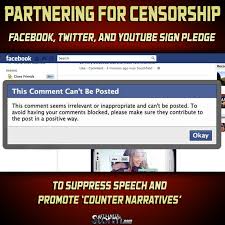 Under the guise of battling hate speech, illegal in the European Union, these incredibly popular online platforms have agreed not only to take down content considered to incite violence or hate, but to institute 're-education' programs seemingly pulled straight from the text of 1984. According to a statement from the Commission, in addition to a policy of removing hate speech within 24 hours of it being reported:

"The IT companies will also endeavor to strengthen their ongoing partnerships with civil society organisations who will help flag content that promotes incitement to violence and hateful conduct. The IT companies and the European Commission also aim to continue their work in identifying and promoting independent counter-narratives, new ideas and initiatives, and supporting educational programs that encourage critical thinking."

This essentially means, users of these platforms who step out of line will be barraged with information and programs, in an as-yet-undetermined way, which align with goals the European Union favors. According to the announcement, those companies have agreed to work in tandem to accomplish this unapologetically subjective censorship of ideas the E.U. finds offensive.

Such a massive push to curtail hate speech will have inevitably far-reaching repercussions for users in the United States, as the code's murky and broad language and lack of solid methods for carrying out the program leave vast leeway for interpretation.

Digital freedom advocacy groups — and even members of the European Parliament — have already decried the sweeping agreement as "Orwellian" and "lamentable." And, as no surprise to anyone paying attention, one key motivation for this Politically Correct nightmare is fear of terrorism.