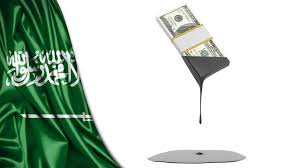 For decades, the story of Saudi Arabia recycling petrodollars, i.e., funding the US deficit by buying US Treasuries with proceeds of its crude oil sales (mostly to the US), while the US sweetened the deal by providing the Saudis with military equipment and supplies, remained entirely in the conspiracy realm, with no confirmation or official statement from the US Treasury department.

Now, that particular "theory" becomes the latest fact, thanks to a fascinating story by Bloomberg which gives the background and details of secret meeting between then-US Treasury secretary William Simon and his deputy, Gerry Parsky, and members of the Saudi ruling elite, and lays out the history of how the petrodollar was born.

Here is the background:

It was July 1974. A steady predawn drizzle had given way to overcast skies when William Simon, newly appointed U.S. Treasury secretary, and his deputy, Gerry Parsky, stepped onto an 8 a.m. flight from Andrews Air Force Base. On board, the mood was tense. That year, the oil crisis had hit home. An embargo by OPEC's Arab nations—payback for U.S. military aid to the Israelis during the Yom Kippur War—quadrupled oil prices. Inflation soared, the stock market crashed, and the U.S. economy was in a tailspin.

Officially, Simon's two-week trip was billed as a tour of economic diplomacy across Europe and the Middle East, full of the customary meet-and-greets and evening banquets. But the real mission, kept in strict confidence within President Richard Nixon's inner circle, would take place during a four-day layover in the coastal city of Jeddah, Saudi Arabia.

The goal: neutralize crude oil as an economic weapon and find a way to persuade a hostile kingdom to finance America's widening deficit with its newfound petrodollar wealth. And according to Parsky, Nixon made clear there was simply no coming back empty-handed. Failure would not only jeopardize America's financial health but could also give the Soviet Union an opening to make further inroads into the Arab world.

It "wasn't a question of whether it could be done or it couldn't be done," said Parsky, 73, one of the few officials with Simon during the Saudi talks

As noted above, the framework of the required deal was simple: the U.S. would buy oil from Saudi Arabia and provide the kingdom military aid and equipment. In return, the Saudis would plow billions of their petrodollar revenue back into Treasuries and finance America's spending.

The man leading the US negotiation, US Treasury Secretary William Simon, had just done a stint as Nixon's energy czar, and "seemed ill-suited for such delicate diplomacy. Before being tapped by Nixon, the chain-smoking New Jersey native ran the vaunted Treasuries desk at Salomon Brothers. To career bureaucrats, the brash Wall Street bond trader—who once compared himself to Genghis Khan—had a temper and an outsize ego that was painfully out of step in Washington. Just a week before setting foot in Saudi Arabia, Simon publicly lambasted the Shah of Iran, a close regional ally at the time, calling him a "nut."

But Simon, better than anyone else, understood the appeal of U.S. government debt and how to sell the Saudis on the idea that America was the safest place to park their petrodollars. With that knowledge, the administration hatched an unprecedented do-or-die plan that would come to influence just about every aspect of U.S.-Saudi relations over the next four decades (Simon died in 2000 at the age of 72).

In the beginning it wasn't easy: "it took several discreet follow-up meetings to iron out all the details, Parsky said."