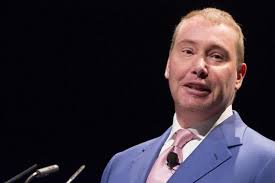 With verious Fed presidents having whipping up the market into a hawkish frenzy in the past two weeks, leading to a dramatic repricing in summer rate hike odds with expectations for a July rate hike now over 50%, many can be "disappointed" by Yellen's speech today, at least according to Jeff Gundlach who said Yellen appears to be more cautious on raising interest rates and he expects her comments to be dovish again on Friday, when she is scheduled to speak at an event in Harvard-Radcliffe.

Specifically, during a DoubleLine event in Bevely Hills, he said said the Fed is "a bit stuck" given that it will not have ammunition available for the next recession unless it raises rates, despite continued lackluster economic growth. He noted that some developed countries, including Australia and Sweden, tried to raise interest rates in 2010, but ended up having to reverse course. "The Fed seems hell bent on raising interest rates until something breaks, which is what happened in these countries," he said.

On the other hand, Gundlach also said inflation is coming, though it's a long way away. Perhaps he was envisioning the analysis we presented yesterday where according to BofA just the base effect in gasoline prices will be enough to send headline CPI as high as 3.5%  by year-end.

With U.S. inflation at 2 percent and unemployment at 5 percent, the Fed is "in kind of a conundrum," he said, estimating that there is up to about a 75 percent chance that rates will be raised this year, based on the yield curve for U.S. Treasuries

Rabo: Both The Fed And PBOC Want Inflation Surge To Stop, But What Can They Do?

Rand Paul Warns America: Time to 'Wake Up' to 'Profound Repercussions' of Biden'

Why Inflation Is at a 12-year High