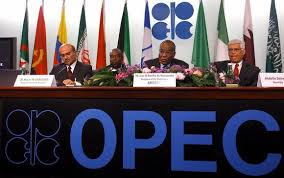 The 2 June 2016 OPEC meeting will be held amid a backdrop of oil prices near $50 per barrel, a sharp drop in Nigerian production due to sabotage, turmoil in Venezuela, Saudi Arabia operating with a new oil minister, and Iran aggressively pumping close to pre-sanction levels.

OPEC interactions have become a direct altercation between Saudi Arabia and Iran, with the remaining members reduced to mere observers.

"OPEC's unity is now in the spotlight more than ever," said an OPEC official. "Would we ever see a minister that carries the same weight as Naimi? I don't think so, especially as it is clear now that decisions are in the hands of the deputy crown prince," reports The Wall Street Journal.

The Prince outlined his strategy in "Vision 2030", and a major step in that direction is the listing of the state-owned oil company Aramco.

In order to gain additional traction for the proposed listing, the Saudis will continue their aggressive stance in OPEC, and keep all the oil producers on the hook, a glimpse of which was given by the new Saudi Aramco Chief executive Amin Nasser.