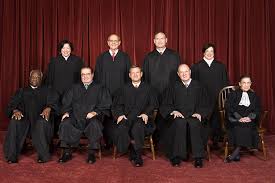 "The vitality of civil and political institutions in our society depends on free discussion… It is only through free debate and free exchange of ideas that government remains responsive to the will of the people and peaceful change is effected. The right to speak freely and to promote diversity of ideas and programs is therefore one of the chief distinctions that sets us apart from totalitarian regimes."—Justice William O. Douglas, Terminiello v. City of Chicago (1949)

Shame on the U.S. Supreme Court for making a mockery of the First Amendment.

All the justices had to do was right a 60-year wrong that made it illegal to exercise one's First Amendment rights on the Supreme Court plaza.

It shouldn't have been a big deal.

After all, this is the Court that has historically championed a robust First Amendment, no matter how controversial or politically incorrect.

Over the course of its 227-year history, the Supreme Court has defended the free speech rights of Ku Klux Klan cross-burners, Communist Party organizers, military imposters, Westboro Baptist Church members shouting gay slurs at military funerals, a teenager who burned a cross on the lawn of an African-American family, swastika-wearing Nazis marching through the predominantly Jewish town of Skokie, abortion protesters and sidewalk counselors in front of abortion clinics, flag burners, an anti-war activist arrested for wearing a jacket bearing the words "F#@k the Draft," high-school students wearing black armbands to school in protest of the Vietnam War, a film producer who created and sold videotapes of dogfights, a movie theater that showed a sexually explicit film, and the Boy Scouts of America to exclude gay members, among others.

Basically, the Supreme Court has historically had no problem with radical and reactionary speech, false speech, hateful speech, racist speech on front lawns, offensive speech at funerals, anti-Semitic speech in parades, anti-abortion/pro-life speech in front of abortion clinics, inflammatory speech in a Chicago auditorium, political speech in a private California shopping mall, or offensive speech in a state courthouse.

So when activist Harold Hodge appealed to the U.S. Supreme Court to defend his right to stand on their government plaza and silently protest the treatment of African-Americans and Hispanics by police, it should have been a no-brainer, unanimous ruling in favor of hearing his case.

Unfortunately, the Supreme Court is not quite as keen on the idea of a robust First Amendment as it used to be, especially when that right is being exercised on the Court's own front porch.

Not only did the Court refuse to hear Hodge's appeal, but in doing so, it also upheld the 60-year-old law banning expressive activity on the Supreme Court plaza. Mind you, this was the same ban that a federal district court judge described as "unreasonable, substantially overbroad…irreconcilable with the First Amendment," "plainly unconstitutional on its face" and "repugnant" to the Constitution.

Incredibly, one day after District Court Judge Beryl L. Howell issued her strongly worded opinion striking down the federal statute, the marshal for the Supreme Court—with the approval of Chief Justice John Roberts—issued even more strident regulations outlawing expressive activity on the grounds of the high court, including the plaza.

And what was the appeals court's rationale for enforcing this ban on expressive activity on the Supreme Court plaza? "Allowing demonstrations directed at the Court, on the Court's own front terrace, would tend to yield the…impression…of a Court engaged with — and potentially vulnerable to — outside entreaties by the public."

Translation: The appellate court that issued that particular ruling in Hodge v. Talkin actually wants us to believe that the Court is so impressionable that the justices could be swayed by the sight of a single man standing alone and silent in a 20,000 square-foot space wearing a small sign on a day when the court was not in session.

What a load of tripe.

Of course, the Supreme Court is not going to be swayed by you or me or Harold Hodge.

This ban on free speech in the Supreme Court plaza, enacted by Congress in 1949, stems from a desire to insulate government officials from those exercising their First Amendment rights, an altogether elitist mindset that views the government "elite" as different, set apart somehow, from the people they have been appointed to serve and represent.