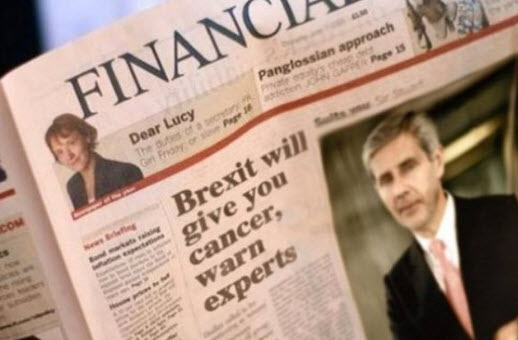 As The Telegraph reports, the letter, signed by some of Europe's most senior business executives, claims Brussels "red tape stifles growth" and a Brexit would "create more jobs" exclaiming that "it is business - not government - which generates wealth."

Perhaps this explains why Cameron, Osborne, Obama, and almost every other establishment politician and lackey has embraced 'Project Fear' when it comes to Brexit, proclaiming World War 3's imminence and all the worst parts of the bible will occur should the great unwashed masses exercise their right to vote for democracy (as opposed to a tyrannical superstate).

In an attempt to redress the balance after the Bank of England and the International Monetary Fund last week warned that a Brexit would damage Britain's economy, the letter in the Telegraph is signed by 306 business leaders in a personal capacity (and also signed by hundreds of people linked to small and medium-sized businesses). In total the backers of the letter are from businesses employing hundreds of thousands of members of staff.

SIR – Britain is the fifth biggest economy in the world and, on current projections, will overtake Germany to become Europe's powerhouse. Britain is America's largest inward investor, and our openness and dynamism mean we attract more inward investment than any other European country.

Federal Prosecutors Drop Charges Against Chinese Researcher Accused of Being a --