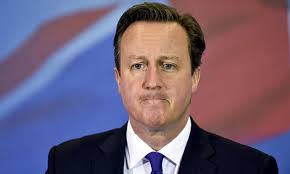 David Cameron has pleaded for Britain to stay in the EU to help prevent the Continent being ripped apart by another conflict.

Introduced by Labour ex-Foreign Secretary David Miliband at the British Museum in London, he said: "Can we be so sure peace and stability on our continent are assured beyond any shadow of doubt? Is that a risk worth taking?

"I would never be so rash to make that assumption."

But he was attacked hours later by Brexit-backing Mr Johnson, who said: "People should think very hard before they make these kinds of warnings.

UPDATED: The government has made no plans for Brexit - despite David Cameron claiming it could trigger war

"No, I don't believe that leaving the EU would cause World War Three to break out on the European continent."

And Mr Cameron's spokesman admitted the government has made no contingency plans for a Leave vote in the June 23 referendum - despite the warning of war.

Mr Cameron evoked the image of the lines of fallen British soldiers' graves on the continent.

He referred to Britain's role in "pivotal moments in European history: Blenheim, Trafalgar, Waterloo, our country's heroism in the Great War and, most of all, our lone stand in 1940".

And he recalled how Winston Churchill "argued passionately for Western Europe to come together, to promote free trade and build institutions which would endure so our continent would never again see such bloodshed".

Rabobank: The Key Underlying Problem Here *Is* The 1%

Many Indians Depend On Gold To Stay Afloat During Pandemic

CENTRAL BANKSTERS ADMIT THEY ARE "PLANNING FOR ABSOLUTE CONTROL!"

Goldman: Here's Why The Shorts Will Have To Cover This Week

The origins of a global economy:

There is More to BlackRock Than You Might Imagine