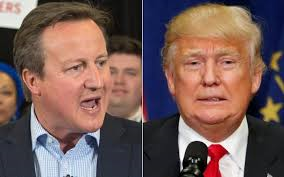 Last December the prime minister called the billionaire businessman "divisive, stupid and wrong" for suggesting that Muslims should be banned from entering America.

When he made these undiplomatic remarks, Cameron had been swept up by the excitement surrounding a UK petition signed by more than 500,000 people calling on the government to ban Trump from entering Britain – an idea Cameron vetoed.

He would have assumed that Trump had no chance of becoming the Republican nominee.

Even so, no other European leader was so outspoken.

Now Cameron is paying for his error of judgment.

One of Trump's advisers has said Cameron should apologise.

George Papadopoulos, Trump's London-based foreign policy adviser on Europe and the Middle East, said Trump is considering a tour of both regions but has not yet been invited to Britain by the government.