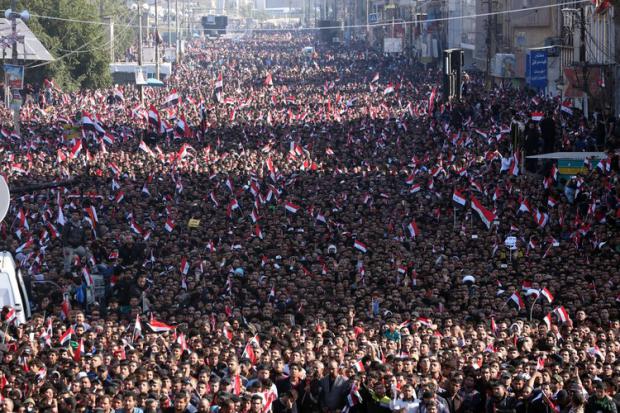 On May 1, 2003, George W. Bush declared victory in Iraq while preening in a flight suit in front of a "Mission Accomplished" banner. Three years later, the country he had invaded descended into a bloody civil war. Eight years after that, the northwest of Iraq was conquered by ISIS.

As I write this, thirteen years to the day after Bush's "Mission Accomplished" speech, the heavily-fortified "Green Zone" compound of government buildings in Baghdad (including the U.S. Embassy complex) is occupied by anti-U.S. Iraqi protesters. Having proven their point, they are now voluntarily withdrawing. As the ultimate stronghold of the U.S.-installed Iraqi government was taken without a fight by unarmed marchers, the last shred of that "Mission Accomplished" banner symbolically went up in smoke.

However, what is a humiliation for the U.S. empire may ultimately be a saving grace for the Iraqi people, if Washington would take the hint and get out of Iraq completely.

The demonstrators that flooded Baghdad are followers of Muqtada al-Sadr, the wildly popular Shia cleric, politician, and militia leader. Under Sadr's urging, they are demanding an overhaul of the Iraqi government: the replacement of many of the corrupt and sectarian ministers with impartial "technocrats."