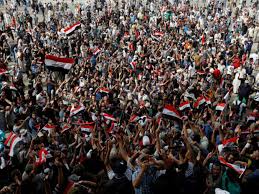 The Iraqi security forces stood back and did nothing as the protesters burst into the Green Zone, graphically illustrating the weakness of Prime Minister Haider al-Abadi and of state institutions generally.

The eruption by Sadrist supporters into the heavily fortified Green Zone, the heart of government power in Iraq, came minutes after Mr Sadr ended a press conference in the Shia holy city of Najaf during which he condemned politicians for refusing to end the political stalemate. He has been demanding that Mr Abadi appoint a non-sectarian government of technocrats that would end corruption and other abuses. Since early in the year, he and his followers have been holding mass rallies but he has previously restrained them from invading the Green Zone, though it was always likely that the security forces there would not stop them.

It is unlikely that Mr Sadr wanted the invasion of parliament because it will lead to further weakening of the government rather than its reform. In the past, he has alternated between making moderate demands, but at the same time threatening that the anger of the people could not be contained. He himself, symbolically, entered the Green Zone a month ago, but instructed his followers not to follow him.

Permanent US Occupation of Iraq?