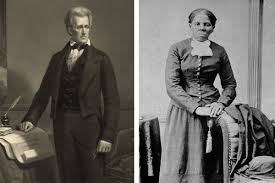 Last week, Americans were informed that abolitionist hero Harriet Tubman would replace infamous ethnic cleanser President Andrew Jackson on the $20 bill. While there were, of course, a collection of racist naysayers, a large percent of the U.S. population supported the change.

After all, the former President's racist ideals were considered appalling even in his own time, and he personally oversaw the deaths of tens of thousands of Native Americans during forced deportations. As America strives to progress in a positive way, celebrating a regularly-used currency with Harriet Tubman, who is not only a woman but played an important role in abolishing the slave trade, seems intelligent.

Or, it would be. But, according to an official announcement from Treasury secretary Jacob Lew, the former President will no longer be removed from the twenty dollar bill, but will now share the honor with Tubman. It what can only be deemed a paradox of progress vs bigotry, Tubman will be placed on the front of the bill while Jackson will be moved to the back.

"The decision to put Harriet Tubman on the new $20 was driven by thousands of responses we received from Americans young and old. I have been particularly struck by the many comments and reactions from children for whom Harriet Tubman is not just a historical figure, but a role model for leadership and participation in our democracy. …

Looking back on her life, Tubman once said, "I would fight for liberty so long as my strength lasted." And she did fight, for the freedom of slaves and for the right of women to vote. Her incredible story of courage and commitment to equality embodies the ideals of democracy that our nation celebrates, and we will continue to value her legacy by honoring her on our currency. The reverse of the new $20 will continue to feature the White House as well as an image of President Andrew Jackson."

USUncut perfectly summarizes the decision, comparing it to President Obama sharing the dollar bill with Donald Trump. Such would be insulting and hypocritical.

It should be noted that Jackson was never in favor of paper money, anyways, and was opposed to the idea of a national banking system. But, likely to distract from this insult, the Treasury Department announced that many previously overlooked female historical figures and notable people of color will be also introduced into the U.S.'s currency.