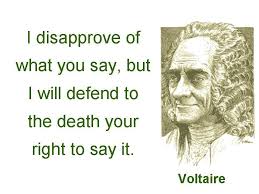 At the beginning of the year, I outlined three trends we should cheer.

And now, just three months later, one of them is proceeding so rapidly that the bad guys are in an outright panic.

Thus: a recent column in Commentary, a neoconservative publication, warned that "anyone with the Internet can write a blog or tweet or Facebook post or can Skype or record a podcast. The castle no longer has walls. The gatekeepers are mostly useless."

That's pretty much what I said, too, except my remarks weren't a warning. They were a celebration.

Any lover of freedom has to be delighted by our ongoing liberation from artificial constraints on opinion. But Commentary, like neoconservatism in general, is far more at home with the New York Times and the establishment than it is with the dissidents of American society. Hence the alarm. Why, the public might be exposed to ideas we haven't approved for them in advance!

Just last week Politico ran an article highlighting the angst of the GOP's so-called intellectuals. "One of the most spectacular fissures of this already dramatic political season," the article began, "has been the messy, public divorce of the Republican intelligentsia from the party's suddenly energized populist voter base."

Translation: no one cares anymore about National Review or Commentary, if they ever did, and people are darn sure not going to censor themselves just because they happen to stray from the opinions these publications have been demanding from them.

Last month I contrasted the legacy of Bill Buckley, founder of National Review, with that of Murray N. Rothbard, Mr. Libertarian. I noted that Buckley took it upon himself to serve as the arbiter of what would be considered allowable conservative opinion. No doubt younger readers, who weren't around in those days, figured I must be exaggerating.

But now along comes trusty old Commentary magazine to confirm what I wrote – except, of course, that they celebrate what the rest of us deplore.

The article I'm referring to is "The Coming Conservative Dark Age," by Matthew Continetti, editor-in-chief of the Washington Free Beacon (a political correctness enforcement site like ThinkProgress, except with a neoconservative flavor).

When Buckley died in 2008, Continetti said, we lost not only a bright and witty man but also a man who sought unity and respectability for American conservatism by excommunicating those people and groups the magazine considered unworthy of its support.

"It was Buckley who for decades determined the boundaries of American conservatism," Continetti noted approvingly.