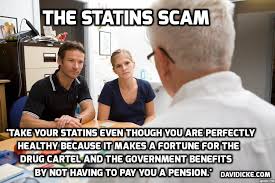 (NaturalNews) Common dietary advice is to avoid saturated fats and instead consume polyunsaturated fats, like those found in vegetable oils. But this dietary consensus is starting to crack in the face of study after study showing no health benefit to avoiding saturated fat.

The most recent study was conducted by researchers from the universities of North Carolina and Illinois, in conjunction with the National Institutes of Health, and published in the British Medical Journal. It found that while a diet that replaced saturated fat with polyunsaturated fat did cause blood cholesterol to drop, this led to no change in the risk of heart disease or death.

Except among the people who had the greatest drop in blood cholesterol. Those became more likely to die.

The researchers re-analyzed data gathered from the 1970s Minnesota Coronary Experiment, in which 9,423 residents of state mental hospitals and a nursing home were randomly assigned to either keep the same diet or to replace butter and other saturated fats with polyunsaturated fats (in the form of margarine and corn oil).

There was no connection at all between polyunsaturated fat consumption and heart disease risk.

The study did not examine another category of fats, monounsaturated fats, found in high levels in olive oil and many nuts.

The researchers concluded that there has been an "overestimation of the benefits of replacing saturated fat with vegetable oils."

"The public health message needs to change to focus on dietary changes that are proven to improve health and that means following a high fat Mediterranean style diet."

The official consensus on cholesterol has already started to change. In 2015, the United States became the last nation on earth to drop its warning against dietary cholesterol, after the Dietary Guidelines Advisory Committee concluded that there is no scientific evidence of a connection between cholesterol intake and heart disease.

Even so, the government was reluctant to abandon its former position entirely, and still recommends "eat[ing] as little dietary cholesterol as possible." In spite of – it bears repeating – absolutely no evidence that dietary cholesterol is bad for your health.

The U.S. Dietary Guidelines still recommend that people limit their intake of saturated fat, but evidence suggests that this may be the next false dietary idol to fall. A number of major studies have repeatedly shown that people with a high saturated fat intake are no more likely to die early than people who eat less of it.

They found no evidence that saturated fats are bad for health. None.

It was the sixth study in recent years to find the same thing: Trans fats are terrible for your body. Saturated fats seem to do no harm. Other studies, in fact, have suggested that saturated fats, as essential nutrients, actively promote good health.

Why are government agencies and the medical establishment so reluctant to abandon their outdated guidelines in the face of overwhelming new evidence? In part, people are simply slow to change their ideas.

In part, it is likely due to the disproportionate influence of the drug industry, which wants to keep a high market for its blockbuster cholesterol-lowering drugs, statins – the best-selling prescription drugs of all time.