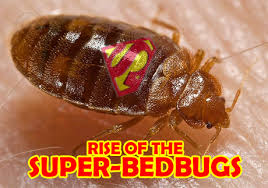 (NaturalNews) Overuse of pesticides as a measure to control bed bugs is causing the insects to rapidly evolve resistance to the chemicals used against them. Remarkably, the animals are evolving both chemical and physical methods of resistance, recent studies have shown.

Bed bugs are tiny, blood-sucking insects that live in the cracks and crevices of beds and other soft furniture. They are active at night, and detect humans by the heat and carbon dioxide given off by our bodies. Once a common scourge – in the 1880s, 75 percent of households in England had bed bugs – they largely disappeared from Western homes following World War II. But in recent years, their populations have boomed again.

A recent study, conducted by researchers from the University of Sydney and published in the journal PLOS One, found a remarkable reason for the growing resistance of bed bugs to pesticides.

Like all insects, bed bugs have an external skeleton, known as an exoskeleton or cuticle. The researchers compared the cuticles of bed bugs of both the pesticide-resistant and the pesticide-vulnerable varieties, and found that the thicker a bed bug's cuticle, the stronger its pesticide resistance.

In other words, bed bugs are literally evolving thicker exoskeletons to keep pesticides from being able to penetrate their bodies and kill them.

Another study, published earlier this year in the Journal of Medical Entomology, shed light on some of the chemical methods that bed bugs use to survive attempted poisoning. That study was also the first to prove that bed bugs have now developed resistance to the controversial but widely used class of insecticides known as neonicotinoids.

Bed bugs have already developed widespread resistance to a former frontline toxin, the class known as pyrethroids. That's why neonicotinoid-pyrethroid cocktails are now the anti-bed bug pesticide of choice.

Neonicotiniods have become infamous in recent years for their damaging effect on populations of insect pollinators.

In addition to proving the existence of neonicotinoid resistance, the study shed light on the remarkable scale of that resistance.

One group of bed bugs came from a population that had been captively bred for 30 years, before neonicotinoids were in widespread use. Another was collected from a pyrethroid-resistant population in Jersey City in 2008 that had presumably been exposed to neonicotinoids in small doses, but had not been exposed to them since. The others were collected recently from homes in Cincinnati and Michigan.

The researchers found that it took only 0.3 nanograms (ng) of acetamiprid, and just 2.3 ng of imidacloprid to kill 50 per cent of the laboratory bugs. In contrast, it took 365 ng of imidacloprid to kill the Cincinnati bugs and 1,064 ng to kill the Michigan bugs. It took an astonishing 10,000 ng of acetamiprid to kill 50 percent of the Michigan and Cincinnati bugs – more than 30,000 times the dose needed for the laboratory insects. The numbers for the other two pesticides were similar.

Another important discovery was that pesticide-resistant bed bugs produced higher level of "detoxifying enzymes" than the vulnerable insects did. This might mean that insects that have become resistant to one type of pesticide get some measure of protection from all poisons as a result.