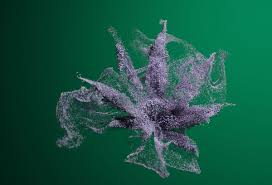 The marijuana analytics company Steep Hill doesn't smell dank, or skunky, or "loud"—unless you happen to arrive when a client is dropping off a sample. No seven-pointed-leaf logos ornament the walls; no Tibetan prayer flags flutter from the doorframe. Inside, a half-dozen young scientists work in a glass-walled lab to the sounds of whirring ventilation and soft jazz. The effect is one of professionalism and scientific objectivity.

Still, this place is all about weed. And Reggie Gaudino, Steep Hill's burly and dreadlocked 53-year-old vice president of scientific operations, does look the part. Steep Hill is headquartered in famously 420-friendly Berkeley, California, after all. "I've been smoking since I was 13 years old," he says, looking down over a railing at the lab. It's a world he has long appreciated. Now he'd like to give a little back. "There's so much good that can be done with cannabis, and so little of it is being done." "There's so much good that can be done with cannabis," Reggie Gaudino says. "And so little of it is being done."Preston Gannaway

As more and more states (23 so far) are finding legal ways for people to consume cannabis, Steep Hill and labs like it are becoming more important. Steep Hill quantifies the numbers you see on labels in dispensaries: how much tetrahydrocannabinol (THC, the molecule that gets you high) and cannabidiol (CBD, the component of weed thought to alleviate seizures) are in a given strain of pot. But any remotely dedicated smoker will tell you that a strain is more than its potency. Purple Kush and Sour Diesel have different characters, different smells and tastes and feels. Those are the result of the interactions of hundreds of molecules—cannabinoids, yes, but also another class called terpenoids. Myrcene, for example, smells like hops and mango (and some fans claim it increases the potency of THC). Beta-caryophyllene has the scent of pepper. There's also ocimene, nerolidol, pinene—the interaction of all these chemicals creates whatever distinction exists between '78 LA OG Affie and, say, Green Crack.

So when someone drops off one of those samples at Steep Hill's reception, the lab swoops in to quantify 27 of the most prominent of these flavorful, experience-defining molecules. After eight years in business, the company has accumulated and tested thousands of samples—it has stacks and stacks of plant tissue in test tubes in a giant freezer. It has analytical chemistry on those, and thanks to a deal with the marijuana review site Leafly, the company also has thousands of crowdsourced reviews. When it comes to data on weed, Steep Hill is, well, the bomb.

It's one thing, though, to know what molecules are found in different weed strains. It's another to know what those chemicals actually do—scientifically speaking. Their aromas certainly affect the experience of consumption, somehow. They might even underpin cannabis's putative medicinal effects—fighting nausea, stimulating appetite, easing seizures, and perhaps even more.