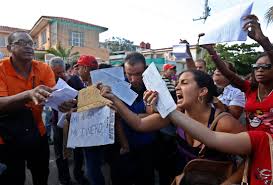 Facing a new rush of undocumented migrants from Cuba — with hundreds already in Costa Rica or Panama — the Costa Rican government has called an urgent meeting Tuesday with officials from the United States, Central America, Mexico, Cuba, Colombia and Ecuador to search for a regional answer to a new chapter of the emerging migration crisis

Roxana Acanda, a Cuban who has lived in Ecuador since 2013, is about to start the long trek from Quito to the United States.

Although she does not know exactly when she will leave for Panama — where about 3,500 undocumented Cubans are stranded because neighboring Costa Rica closed its borders to them — the 35-year-old Acanda, a college graduate in social studies from Sancti Spíritus, knows her departure is imminent.

Ecuador is suffering through an economic crisis, she says, and Cubans are feeling the rejection by Ecuadorans who complain that migrants are taking their jobs.

"The economic crisis has generated xenophobia against the Cubans," Acanda said, adding that she has been unemployed for nearly one year.

Cuba Demoted To "Not Real Socialism"

Why Cuba's youth are revolting now against the island's dictators

DHS warns Florida organizers not to launch flotilla to Cuba

Democrats And Republicans Unite To Demand US Invasion Of Cuba

No Biden Regime Intent to Lift Illegal US Embargo on Cuba